Email ThisBlogThis!Share to TwitterShare to FacebookShare to Pinterest
Labels: आत्मचरित्र

Objective
Prakrits and Pali are the ancient colloquial and literary languages that were extensively used by Buddhists, Jainists, and Hindus for over a couple of millennium to keep alive the rich tradition of religious and philosophical thought. Rich treasures of the knowledge, poetry, plays, and folklore have been preserved in these languages of the then masses and have helped to enlighten the common people across the country. Some of these languages became official and religious languages in Central Asia, Chinese Turkmenistan, Ceylon, Brahmadesh, Tibet and elsewhere as well. Detailed studies are ongoing on academic levels and religious circles but the importance of these languages is still unknown to the masses in general though the present colloquial languages are direct descendants of them. These languages represent the largest population belonging to the three religions.
The first International Conference is intended to connect intellectuals and laymen with the tradition that once had connected half of the world. However, today these languages and religious and secular literature written in them except for limited academicians and religious masters mostly remain unknown to the people thus depriving them of their own linguistic and literary heritage.
Keeping in view the neglect towards Prakrit-Pali languages, we have decided to organize a three-day International conference in Pune in which we are inviting the scholars in these languages from across the world to cover a variety of the topics of concern and deliberate on the future course of action to revive/preserve these languages. Their relationship with modern languages also needs to have a fresh look. Also, we intend to help people to remove deeply rooted misconceptions about the origin and the flow of these languages in the modern context.
This conference invites not only linguists but also the scholars who have deeply studied the Prakrit and Pali literature, secular or religious, and can provide new insights.
Suggested topics:
Although the participants can submit their papers in their areas of expertise not mentioned here, we desire to cover the following areas those we think important.
1.     The origins of the Prakrits, Pali and their inter-relationship.
2.     Ancient grammars of Prakrits and Pali and their impact on the literature.
3.     Prakrits used by Jain’s in their religious texts.
4.     Impact of north Indian Prakrits and Pali on modern north Indian languages and dialects.
5.     Impact of Jain Maharashtri on modern Marathi language.
6.     Classification of the Prakrit on the Niya Slates found in Chinese Turkmenistan and its significance.
7.     Prakrits in Drama, epics, poetry, epigraphs and numismatics in the period from 6th century BC till 3rd century AD. and their evolution.
8.     Kacchayano’s Pali Grammar and its impact on Pali Buddhist canon.
9.     The development of Prakrits to the modern languages, an evolutionary journey.
10.                         Social life and norm-changes as depicted by Prakrit literature at different times.
11.                         Philosophical thought appearing in Prakrit and Pali religious literature and its social implications.
12.                         Contribution of Jain’s in keeping alive and enriching Prakrit languages through the centuries.
The above stated are the topics at the minimum should be covered in this first-ever conference we have intended. Also, we expect the papers being submitted should provide the new views and dimensions to the subject matter covered in the paper submitted. Repetition of traditionally held views should be avoided. No propagandist paper will be entertained.
at December 29, 2019 No comments:

Email ThisBlogThis!Share to TwitterShare to FacebookShare to Pinterest
Labels: शिक्षणव्यवस्था 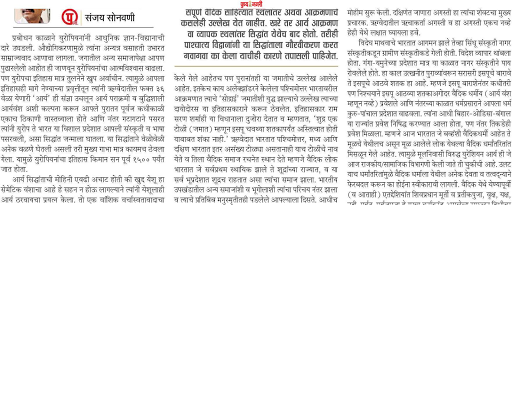